I am getting behind in my book a week aim. I blame jigsaw puzzles. I have banned myself from starting another puzzle until this review is written so here is my book review for this week, only a few days later than planned.

The Herring seller’s Apprentice is a novel by L. C. Tyler. It is considered to be in the genre of comic crime fiction and is the first in the Elsie and Ethelred Mysteries series. Contrary to my initial intention this book is similar in genre to last week’s The Fugitive Pidgeon by Donald Westlake which leads me to the possibly unfair pronouncement that it is not as good. The two leads in the book are Ethelred, a writer of crime fiction and Elsie his agent. The plot focuses on the apparent suicide of Ethelred’s ex-wife followed by Elsie’s desire to play sleuth and Ethelred’s apparent disinterest in the whole thing. The blurb on the back perhaps gave a little bit too much away, and the pronouncement on the front that it featured P. G. Wodehouse-like characters I consider overly complimentary having now read the book.

I’ve already mentioned that it wasn’t as good as last week’s read however it did have good points. The characters, though not what I would consider P. G. Wodehouse-like, are well formed and on the whole both Ethelred and Elsie are likeable. I found Elsie’s bullish but well-meaning manner not dissimilar to M. C. Beaton’s Agatha Raisin but far less infuriating. In fact I think she is my favourite part of the book.

Throughout the book there are moments of competent comic writing but I found the book had a far more sinister feel to it than I would expect from something professing to be comic crime fiction. In fact the ending was anything but light and fun, the only explanation I could come up with is that it is the first of a series and the ending will be more satisfying when seen in context of the series. 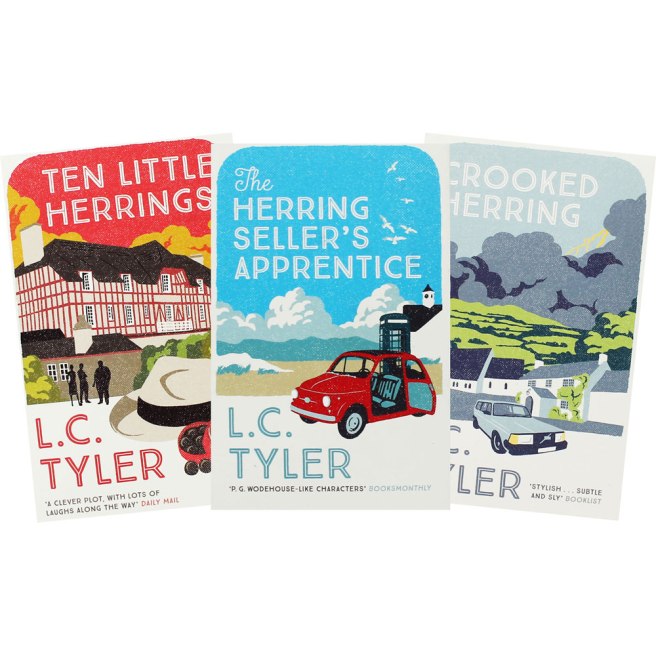 If I forget the fact I was expecting something lighter and more quick witted the book had a few things besides its main characters going for it. The book was intriguing; when I was two thirds of the way through I still wasn’t sure exactly what was going on. The writer essentially tells you, with a certain bluntness, it’s not what you think, whilst never explaining in what way. Also by the end the book does provide you with all the information you need to figure out exactly what is going on, which is satisfying in a crime fiction novel.

Unfortunately the book seemed clumsy. The awkward bluntness that the reader is informed of some important information, and some very simplistic sides to some characters seems almost amateurish. The tone and style of writing though clearly an attempt to be satirical, light and caper-ish, as Wodehouse is, doesn’t really reach its mark and instead comes across as either indulgent or a poor impersonation.

I may be being a bit harsh, particularly as I was intrigued at times, but I think the ending disappointed me enough to taint any review I could give. I specifically avoid reading other people’s reviews or any information of the author before writing my review so that it will be more honest in my opinions. Having now looked up this series and seen this book and others of this series have been up for awards some of which they won I’m hopeful the series improves. Despite my slightly negative comments I’m not averse to the idea of checking out another in this series. Most of the issues I had with the book seemed more related to a lack of polish and perhaps inexperience in novel writing. Now that I am aware this is his first book I am inclined to believe later books would be better.

I will finish with a couple of quotes I did enjoy:

‘I offered to drop Elsie off in Hampstead, but that, as she pointed out left her car stranded in in Findon. Since it would be too late, once in Findon, for her to drive back again to London that night, we agreed that one or other of us would have to sleep on the sofa, while Elsie slept in my bed.’

‘We gave our condolences to Ethelred and Charlotte, on the grounds that there was nobody else to give them to and we didn’t want to take them home with us.’

I have a fascination for fairly old books that smell like books, but more importantly with quirky titles. I will buy a book purely for fulfilling these criteria even if it isn’t a book I would normally enjoy. Perhaps the rational is that if the title manages to grab my attention or amuse me then surely the book will also. This collection started with a book titled ‘Eating People is Wrong’ by Malcolm Bradbury first published in 1959; despite my love for this book I haven’t actually read it in its entirety. I tried once a few years back and it seemed over my head and not wanting to lose my love of the book I stopped reading intending to read it another time; I’m thinking soon.

A newer addition to my small collection is ‘The Fugitive Pigeon; by Donald E. Westlake first published in 1965. This was a charity shop find, the book itself is in great condition, hardback and still in its original sleeve; it smells incredible too. It has a wonderful quirky cover and somewhere in the back of my mind I was sure Westlake was an author I ought to remember.  I bought it a while back and have only just got around to reading it and I’m so glad I did. 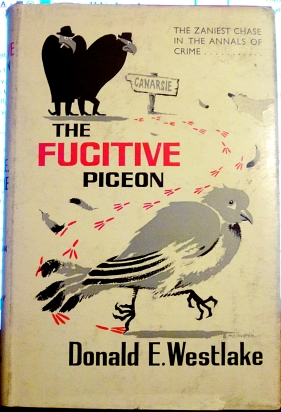 Westlake it turns out has over a hundred pieces of written work to his name, fiction, non-fiction, and screen plays. There are several movies based on his work as well, films including Payback and Parker. I knew I knew that name. 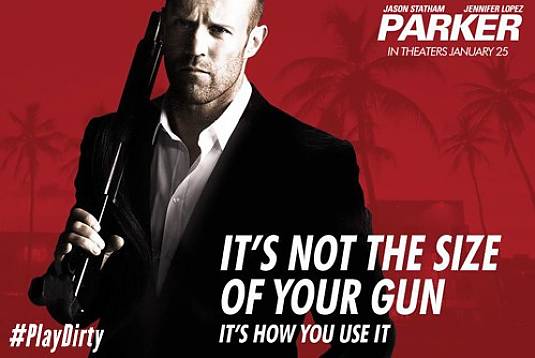 The novel is firmly in the comic crime fiction genre, it’s light, clever and fast moving. There’s some great imagery without long winded descriptions. Some people may disagree but I would say Westlake’s description style has a lot in common with Wodehouse, the humorously insulting manner seems to echo Wodehouse, perhaps not as refined or clever, but still entertaining. For example the following delightful descriptions:

‘Uncle Al is a big hefty guy, about two-thirds bone and muscle, about one-third spaghetti.’

It’s the sort of book you could read all at once. The novel is written in first person as the lovable but unambitious and inept protagonist Charlie Poole tries to clear his name with a crime syndicate he inadvertently gets involved with. The characters are really likable and human with a hint of caricature about them. The plot romps along at lightning speed, there’s never a dull moment and there are plenty of light-hearted insights from Charlie.

‘Making a getaway by subway is not good for the nerves. The train just barely gets rolling pretty good when it slows down again, and stops, and the doors slide open in a very ominous way with nobody near them. Two killers do not get on board, and the doors close, and the train starts forward, only to go through the whole thing again two or three minutes later.’

The only negative I found with this book was the over use of place name’s throughout New York. Perhaps it’s because they are meaningless to me as one who has never been to New York, and quite probably it would add a whole new level to the book if I understood the references. One thing I found particularly impressive about this book, is how well it has aged (not just physically). It doesn’t seem at all dated, apart from a distinct lack of using technology everything else seems perfectly plausible, there’s no reference to events of the time that anchor it to a date, it could easily be set much closer to current times and that is quite an impressive feat for a 50 year old piece of crime fiction.

This is yet another success for my weekly book goal. I thoroughly enjoyed the story and am going to look out for more of Westlake’s work which is really the highest compliment that can be payed to any author.

This weeks I found the book challenge harder than anticipated, far harder than simply reading a book should be, but perhaps because of that it was all the more satisfying. The book I chose this week was Agatha Raisin and the Quiche of Death by M. C. Beaton. I noticed a whole collection of Agatha Raisin books whilst Christmas shopping at The Works on offer at 3 for £5. These books all have quirky titles and fun covers (naturally I would not dare to judge a book by its cover) and having read the blurb for a couple decided to buy the first 3 of the series. The books are light hearted murder mysteries set in the Cotswolds (English countryside). The lead character, Agatha Raisin, is a newly retired business woman who is finding retirement extremely dull, and fitting into the village nearly impossible before she then ends up at the centre of a local death.